I think that wildflowers have to be one of the loveliest gifts on this Earth. Their changing panorama of colors, shapes, sizes and heights provides delight throughout the seasons. Wildflowers can be used anywhere — in the home landscape, they are ideal for creating colorful beds and borders, as well as offering a lower-maintenance alternative for large areas or replacing grass. Wildflowers can be planted to cover large, open areas or assist in the recovery of a landscape that has been damaged or destroyed by the actions of people, a natural disaster, or the spread of invasive plants. 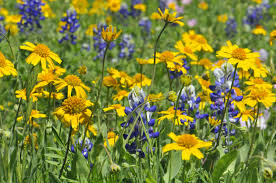 So what exactly makes a flower a ‘wildflower’. It is not an exact term nor is it well defined. Some people say a wildflower is a plant that was not intentionally seeded or planted and grows without cultivation.  Others classify a wildflower as any plant growing without the help of man regardless of the  country of origin. Still others define a wildflower as a plant found in a specific geographic area that was grown from seed or plants also from that area.

Wildflowers and other plants that were growing before European settlement in what we now call the United States, Canada and Mexico are called native plants or indigenous species. Other plants, often referred to as exotics or aliens, were originally brought here from another part of the world. Many exotic species including flowers, grasses, trees and shrubs are among our favorite garden plants. A few, including some wildflowers, have escaped and become established as part of a local environment or naturalized. Some exotic species have even become invasive and are considered noxious weeds that need to be eradicated. 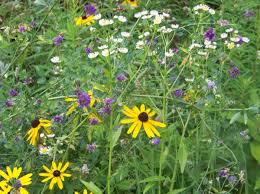 A garden of wildflowers offers benefits to both the gardener and the environment. Once established, properly chosen wildflowers require less maintenance than traditional landscape plantings which can mean less watering, fertilizing, pest control and mowing. Some plants have deep root systems that prevent water run off and soil erosion, and enable them to withstand drought. Their growth also brings earthworms and beneficial soil microorganisms to enhance soil health. And colorful blossoms can be arranged into lovely, casual bouquets that brighten the home. 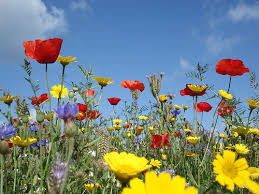 Flowers provide nectar and pollen sources for bees, butterflies and other pollinators, while ripened seeds are a food source for birds and wildlife. Current research suggests that native plants and flowers might be more attractive to native bees than exotic flowers. Even a small area in a garden or landscape planted with wildflowers that bloom at varying times throughout the growing season helps attract and support pollinators.

Many of these beautiful yet hard-working plants are equally at home in garden beds and borders as they are in larger wildflower plantings and restoration projects. Purple coneflower (Echinacea purpurea), California poppy (Eschscholzia californica), columbine (Aquilegia canadensis), butterfly weed (Asclepias tuberosa), and black-eyed or brown-eyed Susans (Rudbeckia triloba and R. hirta) are among the popular wildflowers planted by American gardeners, all of which happen to be native to the U.S. 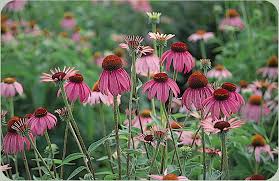 One of the most admired wildflowers is Purple Coneflower (Echinacea purpurea). It is native to the Midwestern prairies and dry, open woods of the Southeast but can be found in gardens from Maine to California because it is fairly adaptable to most types of soil and does well even in dry conditions. Plants flower from late spring to early fall attracting butterflies and bees to the large, purple, daisy-like flowers. After the long-lasting blooms drop their petals, the distinctive seed heads develop and provide food for goldfinches and other birds. (Zones 3-8) 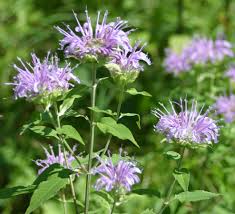 Wild Bergamot (Monarda fistulosa) is native to a large part of the country including the Northeast, Midwest and Rocky Mountain region. Also called Bee Balm, the whorls of pink to lilac colored flowers open in summer to attract bees, hummingbirds and a variety of other pollinating insects. It gets the name Wild Bergamot from the aromatic leaves that have a scent reminiscent of the bergamot orange tree of Europe. Monarda had many medicinal uses to the Native Americans. Today the leaves are often used to make tea. Plants do best in dry open areas and woodlands but can grow in moist soils as long as they are well drained. (Zones 3-9) 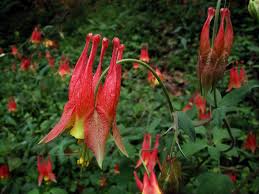 Eastern Columbine (Aquilegia canadensis) despite its species name is native to the East and Midwest U.S. as well as eastern Canada. It is one of about 30 species of Columbine found in North America. Columbine is often found in a shady woodland setting though they have a deep taproot that enables them to grow in dry sites. The colorful red and yellow flowers that open in spring and summer are a favorite of hummingbirds. Blue Columbine or Rocky Mountain Blue Columbine (Aquilegia caerulea) has beautiful blue and white flowers and is one of the many columbines found in the western U.S. It is the state flower of Colorado. (Zones 3-9)

New England Aster (Symphyotricum novae-angliae, previously Aster novae-angliae) is a favorite of many gardeners for the beautiful violet-purple flowers that cover the plant in fall. Its native range is from New England all the way west to the Rocky Mountains and as far south as Tennessee and North Carolina. Plants grow best in areas with full sun and moist but well-drained soils. Valuable in the garden and any wildflower planting for its late season color, New England aster is also a nectar source for Monarch butterflies as well as attracting native bees and pollinators. (Zones 3-7) 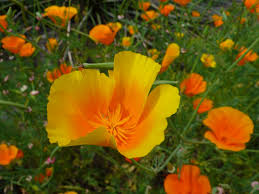 California Poppy (Eschscholzia californica) is perennial in its native California but grown as an annual in colder climates. Spanish explorers who saw the California hillsides covered with the golden orange poppies called the area the Land of Fire. It was introduced into European gardens in the 1830’s. California Poppy has golden-orange, silky, saucer-shaped flowers that open during the day and close at night or on cloudy days. Plants bloom best in the cool weather of spring and fall. In mild climates it will bloom several times per year. In colder climates, it may self-seed in spring and flower again in the fall. California Poppy is the state flower of California. (Zones 8-10)

While some perennial wildflowers adapt to a range of growing conditions, other wildflowers prefer a specific region of the country or very specific environmental conditions. Chocolate Flower (Berlandiera lyrata) is a delightful treasure with cute, yellow, daisy-like flowers that exude the smell of chocolate in the morning. However, it is native to the dry parts of Kansas, Colorado and south to Arizona into Mexico so it loves hot sun and poor dry soils. Grow it in soil that’s even halfway decent and it gets leggy and flops over. (Zones 5-9)

Indian Paintbrush (Castilleja sp.) is another much admired wildflower that seems to grow without care in its native environment that ranges throughout North America depending on the species. It derives its name from the striking orange-crimson spikes that appear in spring and resemble a brush dipped in paint. However, Indian Paintbrush can be difficult to grow from seed and establish in the garden. They are considered hemi-parasitic which means they need to grow in close proximity to other wildflowers and grasses. Indian Paintbrush produces roots that attach themselves to a range of plants that grow nearby to obtain some nourishment. Without these host plants, Indian Paintbrush declines and eventually dies. It is a challenge for even experienced gardeners but could surprise you if planted in the right conditions. (Zones 3-9)

© Mertie Mae’s ‘Matos  and Horticulture Talk!, 2005-2020. Unauthorized use and/or duplication of this material without express and written permission from this blog’s author and/or owner is strictly prohibited. Excerpts and links may be used, provided that full and clear credit is given to Mertie Mae’s ‘Matos and Horticulture Talk! with appropriate and specific direction to the original content.

Have questions about gardening that need answers? Post your question and see it answered in a future blog entry:

Thoughts from our Readers:

Writings from the Soul of a Free Spirit

the girl that's smiling without a reason

Taking control of my own food supply in my survival garden

At Home in Alaska
Creations by Kate

WordPress.com is the best place for your personal blog or business site.